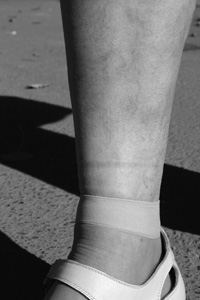 While strolling through the streets of Xiamen in the summer of 1992, I came across many young women wearing short nylon stockings. I remember, with shame, I must confess now, how I would make fun of them with my friends. Taking Dutch standards as the yardstick of good taste, I considered nylon stockings to be part of one’s underwear, whose fringes, indeed the boundaries between the clothed and naked body, were not to be revealed in public. Similar smiles appeared on my face while observing people walking along Chinese streets in their pyjamas. Again, I was amused, puzzled, but above all intrigued by this deliberate act against decorum, this act of merging the inside and the outside whereby the private wear of one’s boudoir is nonchalantly taken to the streets. Now, more than fifteen years later, I feel embarrassed by my arrogance, my laughter, and the implicit imposition of what I then perceived as common sense and “natural” taste preferences. Instead, I would prefer to pursue an alternative reading, one in which these public acts can also be moments of resistance to global fashion norms and thus to globalization, and more fundamentally to the rigid distinctions and demarcations between what is public and what is private. A challenge to the way our lives are ordered, a challenge to the way we are disciplined (see Chew, 2003).

Obviously, with the passing of time, global standards seem to have gained control over Chinese aesthetics. Exposed fringes of nylon stockings are now also perceived by trendy Chinese as a sign of bad taste, and pyjamas are slowly fading out of the public sphere. Instead, a new hypermodern outlook has taken over the cityscape of Beijing, one in which spectacular architectures and glamorous shopping malls dominate. In that sense, hosting the 2008 Olympic Games was a rite of passage for a city where nylon stockings and pyjamas are to be replaced by Gucci and Prada. But what if we insist on looking for the fringes of the stockings in a city? What if we take the stocking metaphor even further as a method to interrogate the city of Beijing’

The fringe of a stocking reveals and defines what is to be exposed, and what ought to be hidden. It sensitizes us to what society deems appropriate and inappropriate, and may inspire alternative readings which, indeed, are to be positioned at the symbolic fringes of the city, interstices where the private and the public mingle. The Olympic opening ceremony presents probably the most spectacular public display of a state-sanctioned version of New China and New Beijing. The world could witness the four great inventions, the Confucian insistence on harmony, the successful travels of the Chinese mission to space, and ingenuous ways to defy gravity as Li Ning flies across the stadium like a wuxia warrior, testifying to what modern Chinese people are capable of. What if, however, we look for the stocking fringes―metaphorically―of the opening ceremony? Is there a possibility to locate the private within such a blatant collective spectacle that seems to erase and rule out any possibility of revealing the hidden, the small-scale, or the minute? Where can we find the secretly concealed desires, the private longings, and the unheard voices in this massive public media event’ 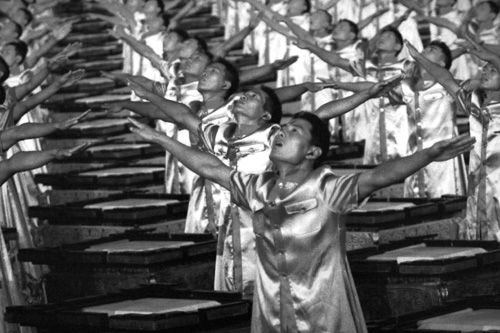 Following the method of the stocking, let us attempt a fringe reading that in this case may well tell a queer narrative. Take the endless rows of young men in short-sleeved “traditional” silk dresses. The camera zooms in on their muscular arms while they fervently play the drums, highlighting the boundary between the shirt and the muscled arm, hinting at the energy of hiding and exposing, building up sexual tension. Later, the young men hide themselves in boxes and reveal the character 和 (he) for harmony, simultaneously simulating the invention of printing technology. At the end of this act, they free themselves from their boxes, smile, and dance eagerly for a few minutes, relieved to have moved from the invisible confines of the boxes back to the open stage and into the audience’s view. Better yet, this transformation from private to public is a world-witnessed, cheerfully massive, and collective act of coming out of the closet. Indeed, in popular discourse, the Games have often been referred to as a “coming-out party.” Indeed, last August 2008 an upcoming global power entered the world stage, and the ceremony culminated in the bond between two men: Jacques Rogge and Liu Qi walked up to the altar almost hand in hand on the red carpet, ignoring all the women lining up on either side. Their destiny and loyalty is celebrated by the lighting of the Olympic flame.

To look for the fringes of the stockings in cities like Beijing implies insisting on zooming in on moments where the private intersects with the public, to search for the interstices where new tactics of living are explored, where the everyday takes control over the grand narratives of progress, democracy, and modernization. Dominant discourse may do its utmost to contain, hide, and exorcise such places and moments of resistance, but when even a public spectacle like the opening ceremony of the Games reveals moments where the private invades the public, where a queer aesthetics and sensibility can unsettle the neat and tidy hetero-normative ordering of public space, then Beijing must and will offer ample sensual zones where the public and the private intermingle. These are zones that attest to the observation and belief that there is always more to a city (and life) than what meets our eyes. “However we live, there is always more. We do not know of what a body is capable, nor how it can live. The alternatives of contentment (I have arrived) and hopelessness (There is nowhere to go) are two sides of the same misguided thought: that what is presented to us is what there is. There is more, always more” (May, 2005, 172). Beijing is full of sensual zones that carry the promise of more, zones with a surplus of meaning, zones with neither an inside nor an outside, like the fringe of a nylon stocking.