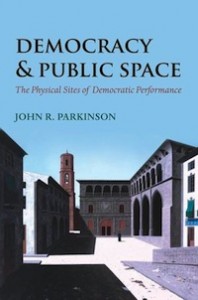 [1]Architects, asked to design government assembly buildings or urban public spaces, often assume that their designs will help shape democratic practices. Many urban theorists are greatly concerned about the « privatisation » of the spaces available for public gathering. John Parkinson’s new book sets out to challenge these broad generalisations, seeking to establish a more nuanced analysis. Parkinson, as he himself says, is a « specialist in deliberative theory and practice » (p. 222), and has already written extensively on deliberative democracy. In this book, he challenges both political science and urban theory. The former, he argues, has focused too much on processes and procedures and too little on the performative dimensions of democratic practice and the stages and settings in which such performances are enacted. The latter, much more concerned with the qualities of physical urban space, and especially parks and plazas, has approached the analysis of public spaces with too crude a conception of the ownership and uses of physical spaces.

Parkinson’s core argument is that the physicality of public space matters for the quality of democracies. He emphasises in particular that citizens need to be seen as well as heard by their representatives, and need to be able to physically see their representatives and how they conduct themselves, as well as hear about them in the media. He thus challenges the argument that the physicality of democratic performance can be displaced into the digital world without loss of democratic quality. Through articulating his understanding of  deliberative democracy, he shows why and where the physicality of performative spaces is important. He then elaborates his ideas through an analysis of the public space qualities of eleven capital cities from around the world.

His account of democracy, as he comments in his conclusion, comes from « a tradition of democratic thought that focuses on the public sphere, and the myriad ways in which experiences are shared in public and public claims are made on the public » (p. 212). A critical aspect of democracies is that the complex conflicts which arise within any political community are addressed and decided upon in ways that are acceptable to all members of that community. It is this challenge which creates the dramas that are the stuff of political practices, and citizens need to have the opportunity to see the narrative of the drama unfold. This demands attention to staging and setting. Parkinson makes extensive acknowledgement to Hajer’s recent work on this issue (2009). He goes further by focusing on the different kinds of stages and settings which arise with different democratic roles. He identifies four such roles. First, narrating political issues can take place in all kinds of spaces, both formal and informal. It is important, he argues, that formal decision-makers receive feedback on what it is like to be on the receiving end of the decisions they make. Physical spaces are valuable for this where people from diverse backgrounds can gather to protest about some action. Second, citizens may also mobilise to make public claims. Physical spaces, especially if they are regularly used for protest, are important in accumulating authority for a claim. Third, formal arenas and the rituals which are performed there are valuable in giving authority to binding decisions. Finally, physical spaces are needed to give seriousness and authority to the activity of scrutinising the decisions and actions of representatives.

Parkinson then discusses what is meant by the term « public space ». Here his concern is to move beyond a simple duality between « public » and « private space ». He argues that physical space can be public in four ways : it can be openly accessible, and/or use common resources, and/or have common effects, and/or be used for the performance of public roles (p. 61). His critique of urban theorists at this point challenges not just the idea that space in public ownership must inherently be more accessible than space in private ownership, but that the value of public spaces lies in the way they allow encounters between strangers. He is not specific about who these theorists are, but draws on Parker (2004), and also makes use of Borden (2001), and Stevens and Dovey (2004). He underlines that all places where « the public » goes have to accommodate multiple activities and ideas about what is acceptable behaviour. He argues that spaces owned by a public body may have more restricted access (through custom, design and policing) and more surveillance than a space owned by a private body. Yet he agrees with many of the critical urban theorists that the tendency to displace people from their roles as citizens into their roles as consumers should be resisted. Here he is in agreement with urban scholars such as Watson (2006). He makes the interesting suggestion that this demands not a struggle over the ownership of every single open space in a city, but a strategic analysis of how far spaces for public protest and expression of the public as citizens are available in a city. To conclude his general argument, he then turns to the complex issue of how far the design of public space – in buildings, and in streets, parks and plazas – determines how people behave in them. He is very conscious that it is the accumulated symbolism of the physicality of a place that counts for people as much as the physical openings and restrictions.

Chapters 2 to 4 conclude his general discussion and equip him with his main question — how cities perform the democratic roles identified. He then reports on his experiences in the eleven cities selected, focusing on the design of assembly buildings, the availability of streets and squares, and the less formal « arenas of collective life » (p. 89). These accounts  (chapters 5-8) form the second part of the book. In considering assembly buildings, Parkinson looks at the main chambers, as well as the committee rooms. He is critical of architectural discussions of the overall design of assembly chambers and concludes that the arrangement of seats in a chamber is not of much significance. Such buildings do need to express the dignity of the work of a democratic assembly, but he concludes that only the scale of the building and the position from which members speak are important. He is particularly concerned about the way citizens who visit assembly buildings are likely these days to be impeded by all kinds of security barriers and then treated as tourists rather than fellow members of a political community. Some streets and squares have important functions as spaces for protest, especially where they are near buildings which symbolise the polity. Protests draw attention to an issue and enrol people in it. If they take place in locations regularly used for such purposes, the dignity of history adds power to the protest. He notes how variable are the spaces for such protest around key buildings in the different cities he examines. He also recognises that streets, too, are important for protest on the move, i.e. marches. These concerns lead him into some useful comments on the design of streets and squares which have important political functions within a city as a whole. Finally, he looks at the multiple spaces in a city where citizens can feel that they and their diverse points of view are taken seriously. Such spaces may be marked not just by accessibility and inclusive acceptance, but by the ways in which different events are memorialised in statues and other artworks and messages.

In his conclusion, Parkinson not only summarises his approach into ten points. He also provides a set of principles for evaluating the democratic qualities of the spaces available in a city for the public performance of a democracy. These read rather like a design brief to be used by city planners and architects. He uses this scheme to evaluate the cities he has examined. Cape Town and London come off rather badly, while Wellington (New Zealand) and Berlin do well! But he is clearly rather nervous about this venture into normative judgements, and suggests that his principles should be treated more as hypotheses for further elaboration than as general principles.

Parkinson’s approach and line of argument will be appreciated by those working in the interpretive tradition in policy studies (see Wagenaar, 2011 ; Hajer, 2009). Coming as I do from an urban planning background with an interpretive philosophical orientation, I have no difficulty in accepting much of Parkinson’s argument. His challenge to the critical analysis of urban space ownership and use is timely and should add political depth to the studies of public space use and management to be found in the geography, planning and urban design literatures (see Adams and Tiesdell, 2013 ; Carmona et al., 2010 ; Grant, 2006 ; Madanipour, 2003). His call to political scientists to give more attention to the performative practices of democracies is also valuable. I did, however, feel uneasy about some of his thinking. His empirical focus is on capital cities, yet he makes only passing comments about the relation between the city and the wider political communities of which each city acts as capital. Yet the eleven polities are very different. Parkinson argues that these differences will affect the meanings which accumulate around the physical spaces of the capital city, but surely there are major differences between these meanings in states which are federal compared to states which are unitary, and countries where the capital has been in the same place for centuries and where the location of capital and country has shifted significantly in the past. Somehow, the comparison of Berlin and London seemed inappropriate. Maybe my unease here is just a call for more indepth research exploring Parkinson’s « hypotheses ». I also felt that more attention was needed to the interplay between physical political performance and its portrayal in the media. Parkinson argues that TV presentation, for example, is selective not just in what is extracted from such performance, but also in the position of cameras. Yet in some countries, interested citizens can watch their parliaments at work throughout the day.

Finally, I was not sure how far it was possible to develop general principles with which to evaluate the physical settings of democratic performance. In the hands of designers and developers, these could deflect attention from grasping the specific meanings and challenges which surround the physical sites of democratic performance in a particular place. Perhaps they are most useful for citizens’ action groups and protest movements, to sharpen what they should challenge and what defend. Overall, the key message of the book is that the democratic city cannot be « built » physically (p. 199). Its qualities arise from the complex and contingent interaction between evolving political practices and the available sites of their performance. Parkinson is surely right to call on analysts and activists to give much more attention to these interactions.