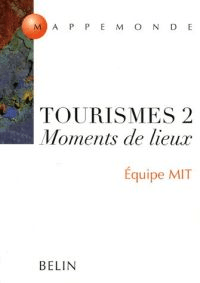 The social sciences have long been reluctant to take tourism seriously. Despite tourism’s obvious prominence as a social practice in the lives of hundreds of millions, when American sociologist Dean MacCannell wrote The Tourist in 1974, he was ahead of his time. The Tourist became a classic only in the fringe field of “tourism studies,” which has since been churning out literature mostly on the management and environmental impact of tourism development. Even in the heady “scapes-and-flows” years of the early 1990s, when the centrality of human movement to history was dawning on social critics, they remained uninterested in studying tourism from the perspective of the tourists. Only today is “the biggest business in the world” beginning to attract attention from mainstream anthropology as well as sociology and geography. In this, Francophone authors such as artists Diller and Scofidio and the Équipe Mit, so far largely unnoticed by Anglophones, have been a step ahead of the crowd. (The question why those particular French authors become fashionable in English that do deserves a separate study.)

In Tourismes 1, the Équipe Mit delivered a timely, devastating and original, if at times somewhat repetitive, attack against the dominant (largely leftist) view of tourism as an inauthentic, homogenizing, exploitative and uncool activity. The best parts of Tourismes 2 are those where the authors add more interesting insult to this injury, especially Chapter 12 where they not only argue that Benidorm, that temple of European mass tourism that critics love to hate, is a healthy enough development that is even now spawning many offspring, but also question the analytical validity of defining a “carrying capacity” for an essential urban space when it is designed for tourism but not when it is designed for living. But the authors’ primary ambition in Tourismes 2 is to reform our understanding of tourism’s evolution. That understanding, they maintain, has been shaped by a handful of undertheorised historical works, which fail to connect the various conditions that, in different places, worked together to result in the emergence of (European) tourism. They wish to set up a new explanatory framework resting on “moments of place,” historical turning points in which processes, both structurally determined and incidental, taking place at different levels and in different localities — for example, the emergence of 18th century biomedicine with its advocacy of purity in “the waters;” the forced stop of a British aristocrat in Cannes because of the cholera; and a French author’s invention of the term “Côte d’Azur” — coalesce to shape new practices at a tourist site that becomes a model for other places.

The authors’ claim to novelty thus lies in eschewing a linear view of tourist history for a processual one, and paying attention to the interplay of social, economic and political processes in various corners of Europe, thus contextualizing the development of tourism more deeply than those before them. As Chapter 16 explains, they are concerned with the relationship between place and time in history — for the study of which tourism offers particularly fertile ground — and stress that places are no random backdrops to unfolding social practices, but through their physical features actually shape them.

The resulting text takes the reader systematically through what the authors term the defining “moments of place” of tourism: beginning with the sojourn of Dutch painters in seventeenth-century Rome, through eighteenth-century Bath and Brighton, to nineteenth-century Nice, Egypt, and St. Moritz, the invention of the wilderness and the heritage movement, to the St-Tropez of the 1960s and the Maldives of the 1970s. The voyage concludes, in Chapter 15, with a particularly helpful recapitulation of the types of tourist places, the motives of the (Western) tourist quest, and the social and bodily practices that — having developed in particular “moments of place” — have become its enduring characteristics, from the search for “wellness” to gazing upon ethnic and class “others”. This is enough to recommend the volume as a good, highly readable student textbook, even though the lack of referencing in long summaries of what clearly is not the authors’ original historical research is bound to raise eyebrows. Yet the account, while rather on the verbose side when talking about French celebrities in St-Tropez, has some significant omissions, which go beyond the introductory disclaimer that the book limits itself to Western tourism. First of all, it is inexplicable why the otherwise interesting Chapter 10, “Ordre et désordre,” which points out the concurrent trends toward highly planned resort belts in the Mediterranean and trekking à la Lonely Planet in Nepal and elsewhere, has only a few lines (p. 269) for the most important projects of ordered tourism in the West: those of the Fascists, the Nazis, the Soviets and their Eastern European satellites. If one takes seriously the comparative, history-of-ideas approach that the Équipe proposes, then these developments are not peripheral but central to the development of Western tourism, as are the nationalist and labor tourist-excursionist movements of the early 20th century that both Dopolavoro and the Tourist of the Ussr award grew out of. Rügen and Sochi, too, had their “moments of place,” and by now a handful of writings have begun to document these.

Secondly, the authors content themselves with pointing out that Western tourist sites have been replicated globally, from ski resorts in Romania to Western-exclusive resort islands in the Maldives. But how do we know if the meaning of such sites and their modes of consumption stay the same as they are visited by Romanian skiers or Indian holidaymaking families? Isn’t it the interaction between the place and its consumer, rather than the hardware of the design, that the authors are rightly interested in?

Thirdly, even limiting oneself to tourism in the West, it is surprising that the emergence of non-Western tourists there is ignored. With the emergence of a major tourist sending market in China, I would not begrudge Trier the “moment of place” that occurred when wineries around the town began bottling a “Marx Wine” for Chinese visitors to this home town of the leader of the world’s proletariat.

Fourth, while the conceptual stress on the interplay between the material qualities of a particular place, the serendipity of the first tourist encounters, and the structural basis of transmission of practices to other places in shaping social history — which does not unfold until Chapter 16 — is new in tourism literature, the Équipe, anchoring themselves in what seems to be a debate specific to French academia, do not acknowledge previous authors (such as Ousby, Stoddard, Corbin and Boyer, whom they cite, or Edensor, Buzard, Koshar, Ely, Mandler and others whom they do not) who have shown links between the appearance of tourist practices in particular places and structural changes taking place elsewhere in Europe. While they justly castigate the lack of attention to early tourism outside the West, the authors seem unaware of previous work that attempts to address this lacuna, notably by Edensor and Oakes.

Despite these shortcomings and the cavalier treatment of English spelling (Allen Ginsberg, for example, is referred to as Allan Grinsberg), Tourismes 2 is a book that connects important ideas and will be of good use as a student text. It is not, however, on the cutting edge in the way that Tourismes 1 was — which makes the reader look forward to the promised sequels 3 and 4.

The social sciences have long been reluctant to take tourism seriously. Despite tourism’s obvious prominence as a social practice in the lives of hundreds of millions, when American sociologist Dean MacCannell wrote The Tourist in 1974, he was ahead of his time. The Tourist became a classic only in the fringe field of “tourism studies,” […]

Lecturer in anthropology at Macquarie University, Pál Nyíri has a PhD in history from Moscow. He pursued undergraduate studies of chemistry in Moscow, Budapest, and New Jersey, followed by graduate training in Asian studies in Oregon. He also had research fellowships in Oxford, Budapest, and Berlin. His research area includes human mobility (particularly migration and tourism) and the cultural politics surrounding its management and containment, as well as China. He published Scenic Spots: The Construction of the Chinese Tourist site and the Question of Cultural Authority, Seattle, University of Washington Press, forthcoming; Transnational Chinese: Fujianese Migrants in Europe, Stanford, Stanford University Press, 2004, with Frank N. Pieke, Mette Thunø and Antonella Ceccagno; China Inside Out. Contemporary Chinese Nationalism and Transnationalism. Budapest, Central European University Press, 2005, ed. with Joana Breidenbach; and Globalising Chinese Migration. Aldershot, Hampshire, Ashgate, 2002, ed. with Igor R. Saveliev.